About My Video Game Reviews... 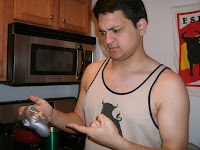 Like most people, I like to think that I am different.  Because of this I decided to spice up my video game reviews by adding a separate score to the game; First Time Playing (FTP).  This score will most likely be different than the overall score because with the FTP score, I judge the game as if it's the first type of game in that genre that I have ever played.  For example I am going to post a review for the First Person Shooter (FPS) Quake 4, and the FTP score represents what I would rate that game if it was the first FPS that I ever played.