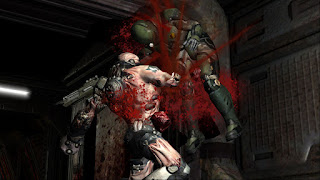 Quake 4 is a magnificent FPS that has held up well.  The visuals, tight controls, creepy ambient sound, and fitting, though scarce, music, make this a great game to jump into at any time and a great game for any first time FPS players (though the learning curve may be a bit steep for first timers).

I had played the original Quake (shareware version) back when it first came out and never got past the first level.  Also due to the fact that I was a technology idiot when I was young I never got to play online though my friend Armando would tell me about how he would shoot people in the face who were playing around the world.  I eventually got the game for N64 and could never get passed the fourth map, until I realized the cheat code for god mode was just naming your file with the quake symbol.

A lot has changed since then and when Quake 4 came out in 2005 I made sure to get it...once it went on sale at GoGamer.  I had just built a computer to play Doom 3 so Quake 4 was the next logical game to buy.  I was impressed to say the least; the controls felt smother than ever, there was a nice creepy atmosphere due to the lack of music and use of ambient noise, and the graphics made me cream my pants.  During my first playthrough I got about halfway through the game and had to stop on account of my job, going back to school, and being indicted by the FCC.  Also my computer got fried because of a faulty power supply and because I spilled one to many cosmos on it.

This past Saturday I decided to pop Quake 4 in since I needed a break from the never-ending game known as Oblivion.  I was amazed to find how easily I was sucked back into the world of Quake.  Quake 4 follows Kane, a marine whose squad is tasked with taking down the communication network of the Strogg alien race (retaliation since the Strogg attacked Earth in order to harvest humans....).  From the get go ID Software did a great job of actually making it feel like a war.  Though as the story progresses, you find yourself with fewer and fewer marines at your side, a little like Doom 3.

The game plays really well and is one of the best FPS, at least when it comes to control, that I have played.  It is your typical keyboard/mouse setup but it just felt really smooth and tight especially given the fact that I played on a laptop.  I should have expected this since Raven Software was involved, the same people who made Soldier of Fortune, another series that helped shape my childhood and fostered my urge to become a heartless mercenary.

The game never feels too easy or too difficult (I died a few times due to some strategic ambushes from the enemy and the crazy bosses).  The bosses are creative and fit well with the narrative, and the ending, though short, fits well with the world of Quake.  I didn't get to play multiplayer this time but in 2005 it was really kickass and if people are still on the servers you are in for a fast paced treat.  (Fun fact, the Quake 4 multiplayer has been used in many tournaments).  The story ties in the actual gameplay quite nicely and is neither too shallow nor too complex. The characters you meet come to life because of their interesting comments, and due to the use of voice over work.  Also any game with Peter Stormare’s voice gets a high score from me (check out the video below to find out why).
If you're a fan of FPS-es you have to get Quake 4.  If you've never played an FPS, grow some balls and pick this game up.  The only complaint I have was that they took out all those hilarious warnings that the original Quake had when you choose to quit the game like “Do I need to bust your face open for trying to quit”.  This is balanced by the fact that if I ever commit a crime I can blame a violent video game like Quake 4 and not be held responsible for my actions.  Thanks ID and Raven Software!! 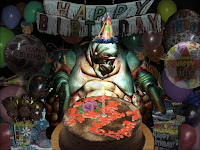